Switch to the dark mode that's kinder on your eyes at night time.

Switch to the light mode that's kinder on your eyes at day time.

Trisha Yearwood has a lot to celebrate this holiday season as she wraps up a round of dates on a solo tour built on the success of her newest album Every Girl. The powerhouse singer is also pulling double duty as host and performer on the 10th Annual CMA Country Christmas.

“It’s such a fun way to get into the Christmas spirit,” Yearwood, who appeared in prior years, said. “So, getting the chance to be a part of it on a bigger level was so much fun. There is so much variety. There are a lot of country artists on the show like Rascal Flatts and Lady Antebellum and Chris Janson and Runaway June.

“There are also other kinds of music represented like CeCe Winans brings the gospel flair. We have Tori Kelly. Kristen Chenoweth, who brings a Broadway-esque performance. This band for KING & Country out of Australia does this performance of Little Drummer Boy that rocks the building. I can’t wait to see the show like everyone else.”

Rounding out the festive lineup on stage with Yearwood are performances by Brett Young and Chris Young. Ahead of the special’s airing, the Grammy Award-winning superstar reflects on the experience following in the footsteps of Jennifer Nettles and Reba McEntire in taking the reins of what has evolved into a yuletide viewing tradition. 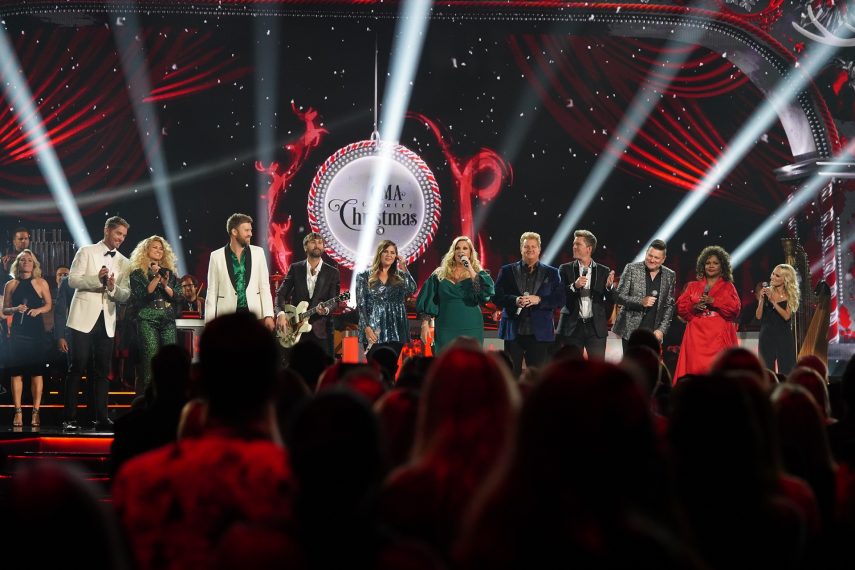 What kind of approach did you take hosting compared to past experiences?

Trisha Yearwood: What I think did help is for the past seven years I’ve hosted my cooking show on Food Network. Our show is not scripted. It’s very loose. It’s very conversational, which I like. I brought that in my head as a challenge for myself. This show you have a teleprompter where there is a lot of copy and artists to know about. So, I wanted to take all that in, but make it feel conversational and not feel like a straight read. That’s not easy to do, but I feel doing the cooking show helped me.

What kind of input did you have when it comes to what songs you perform?

A good bit. It’s one of those things where you wanted everyone to get a chance to sing what they wanted to. But as the host we came up with a pretty cool opening medley. I also picked a song off my own Christmas album. I got to collaborate with all the women on the show…Getting to sing with them was really cool. I think everyone got to sing the song they wanted to.

I know you are on the road right now. What do the holidays in general mean to you and your family? You and your husband, Garth Brooks, are busy individually and collectively, so how much of a priority is it to slow down around this time of year?

We’re very family oriented, so this is a time of year we guard. With as much as we do, we make sure to enjoy each other. From Thanksgiving to Christmas, it’s all sort of sacred to us. It’s a very quiet time. A chance to unwind, visit with our families and just be together. It’s not this rush, but a relaxing time to reset. Everyone in our business takes the holidays off. So, we don’t have to feel like checking emails or that we are letting anybody down. We’re just home, which is what we love. Channeling back to Trisha’s Southern Kitchen, what are there one or two items or dishes that have to be on the table for Christmas?

The big meal I cook every year is for Thanksgiving. Then after that we sort of graze through the holidays. One of the things I do is a family tradition from my childhood. My sister and I make caramel candy that you cut up into squares. Everything is about memories, so for us it’s that memory of our childhood and making those dishes with our mom. I introduced this green punch. Garth was like, “I don’t know about bright lime green punch. I’m not sure what it’s all about.” I’m like, “You have to have it for the holidays. It’s really important.” It’s really good. Now my husband is like, “Are you making the green punch?” So, it’s fun to mix traditions and make things that you did growing up and have it part of new family traditions.

There are so many collaborations on this special. You’ve done some great ones over the years and with your new music. Are there any dream gets you want to record or perform with?

There are a lot of people for sure. I got to sing with so many of my heroes. I never thought I would be able to sing with Don Henley. I got to sing with Emmylou Harris. Sang on my records with Willie Nelson. Of course, Garth. But I married him, so I’m partial saying that. My biggest hero is Linda Ronstadt, who doesn’t sing anymore unfortunately due to Parkinson’s. She has been a friend and mentor, which blows my mind. I still dream of working with her. Maybe I can talk her into producing a record. Those are my heroes for sure. In the premiere, Trisha serves up fan-favorite tailgate food with behind-the-scenes tour footage and stories from the road.

Women in country like a Reba have been vocal about the importance of gender equality and how there is more work to be done. What does it mean to you at this stage of your career to have your newest work resonate and be able to take these songs on tour with emerging female artists joining in support?

It has been great to be at this point in my career, 28 years as a champion for the younger girls coming along. Even if it’s just to be a sounding board for them. I have a lot of friends in this industry who are younger girls who say, “Hey, can you just give me some advice?” Just to be able to share your experience as a singer with another singer. I really think there is still an issue. The percentage of women played on the radio compared to the men has always been an issue in country music. It’s worse now than ever. I love that we are having the conversation. I love that we are doing an awards show that features women. But we have to do something rather than just talk about it. I think the next step is to figure out how we can effectively make change on a corporate level. To say, “Hey, the reasons why you aren’t playing as many women are not valid reasons. Let’s fix this.” What are your go-to Christmas movies?

My favorite Christmas movies are all the classics. I just want Christmas movies playing all day. I love National Lampoon’s Christmas Vacation. I love Chevy Chase. I also love the old Miracle on 34th Street. I like the newer movies too. I know Elf is not a new movie anymore, but in my world it kind of is. A movie that came out and became a classic like the rest of those movies like A Christmas Story..

We bring you the merriest of Christmas episodes to binge!

What is your New Year’s resolution as we enter a new decade?

We are tempted in this world, especially now, to be negative about everything. I can get bogged down into the poor me. What is the world coming to? I made a resolution when I turned 55 and kind of take it into the new year. I really want to get outside myself and how I can help other people. Garth and I are involved in a lot of charities, but I challenged myself to focus on things that I’m really passionate about. One is animal rescue. Another is breast cancer research. Another is the military. When someone comes to me and says, “Hey, I want to do a project with you.” My response is, “Show me how your project can benefit one of these things I’m passionate about. Then let’s talk.” I’m excited about that because I think it gives me a chance to work on a larger scale on things I think are important.

What do you think?

Browse and manage your votes from your Member Profile Page

© 2020 by bring the pixel. Remember to change this

To use social login you have to agree with the storage and handling of your data by this website. %privacy_policy%

Send this to a friend