We Love You George Floyd. We Got You This October 14th #TeachTruth National Day of Action for Your Birthday.


George Perry Floyd Jr. would have turned 48-years-young on Thursday, October 14, 2021—if it wasn’t for structural racism and its conduit in the form of police officer Derek Chauvin.

A couple of weeks ago I had the opportunity to visit the intersection of East 38th Street and Chicago Avenue in Minneapolis, Minnesota—the site of George Floyd Square, which has been created around the place where he was murdered. As we pulled up to the Square and I got out of the back seat of my Lyft, a group of preschool students ambled in front of me, hands clasped together bravely passing through the memorial to George that spills out of the street and onto the sidewalk. On the pavement that stretched out beside the children were a seemingly endless list of names of people who had been sacrificed on the altar of American white supremacy. These tender children’s feet trod on the many frustrations and aspirations of activists who had inscribed their beliefs onto the sidewalk—graffiti that declared, “Black Lives Matter,” “Viva la Revolución,” “Rest in Power George,” and, “We march, y’all mad. We sit down y’all mad. We speak up, y’all mad. We die y’all silent.” And looming in front of these young scholars was the Cup Foods grocery store—the very spot in front of which George had taken his last breath—cordoned off with barricades painted with handprints (the kind you make in preschool) and colorful text that seemed to take on a sacred significance: “Stop the Violence,” and “The People United, Will Never Be Divided.”

I stood there weeping, in a state of confusion, as I took in the incomprehensible contrast of these vibrant multiracial fledglings passing through a horrific murder scene where a Black man asked for his mom and pleaded for his life before being choked to death by the weight of a system that bore down on a white officer’s shoulders as he pressed his knee into the man’s windpipe.

My overwhelm and bewilderment were pierced by a few razor-tipped thoughts—these young people deserve to grow up; they deserve to live a full and joyful life; and they deserved to be told the truth by their teachers about where they had walked that day.

Lawmakers in 11 states–Arizona, Florida, Georgia, Idaho, Iowa, New Hampshire, Oklahoma, South Carolina, Texas, Tennessee, Utah–see it differently. In these states, they have decided that children are better off if we deceive them and have passed legislation that attempts to ban the teaching of structural racism. They would prefer the children who pass through George Floyd Square muffle the sounds of his labored breathing—which still seemed to echo in the street as I stood there—by raising their voice to unquestioningly pledge themselves to America, with liberty and justice for all. These distinguished public servants envision a world where when children look down at the writing on the sidewalk and inquire of their teacher, “What does ‘Rest in Power George’ mean?” the teacher replies, “It means the people love the great founding father of our nation George Washington, who could never tell a lie.” 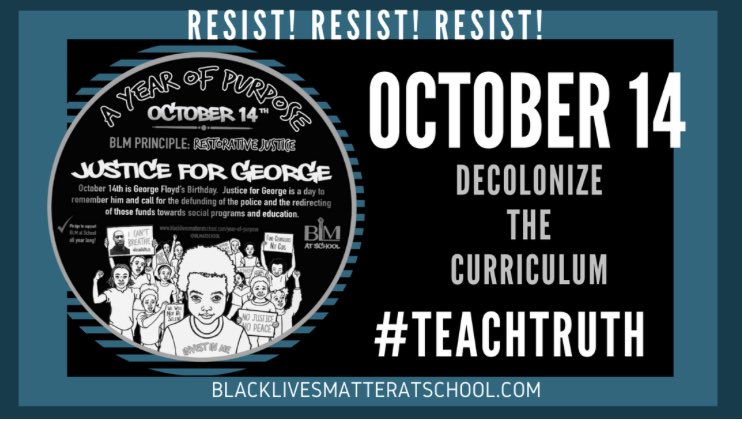 On one level, I can understand the impulse to lie to kids about America; the truth about the atrocities of this nation, to borrow from James Baldwin, are more terrible than anything anyone has ever said about it. I don’t delight in the recounting to youth the destruction this country has wrought on the dispossessed.

But standing there watching these young scholars disappear down the street, I knew—at a level that seemed to be much deeper than just the intellect—that as painful as this memorial was, and as painful as American history is, these students deserved to see it. They deserved to see it because they deserve to know the immense joy of the comradeship that comes from struggling against racism and oppression. They deserve to see it because they have a right to know about the exhilarating stories of their ancestors whose creativity and ingenuity achieved beauty despite the ugliness of anti-Blackness. They deserve the truth because it is a guide to getting free.

When the children passed, I sat on one of the benches that activists had erected at the memorial and worked on summoning the courage to approach the spot where George died. After some time, I made my way to the flower boxes that encircled the very spot where George’s face had been pressed into the concrete. Painted where George’s body had lain, was a striking image of blue spirit emerging from radiant yellow and white light and the words, “I Can Breath, I Can Breath.”

I said aloud right then, “I love you George and I am going to help celebrate your life on your birthday.” I have the great fortune of organizing with the incredible educators in the Black Lives Matter at School movement and we have been planning a National Day of Action to #TeachTruth about structural racism on George Floyd’s Birthday. My commitment to George is to support this National Day of Action.

The real reasons for inflation, how vaccines work, and more facts for Thanksgiving…

Unthanksgiving and the National Day of Mourning: Everything you should know

A Broken Clock is Right Twice a Day

Twitter Has a Field Day With Trump’s ‘Roped Off’ Thanksgiving,…

Black Friday Can Be Every Day

Hyperinflation In Turkey: Wine Prices Up 15% In One Day, Chicken And Cheese Up 10%

Trump Says He’s Most Thankful for Himself on Thanksgiving Day