Why ‘Canine Intervention’ on Netflix trains humans, not dogs 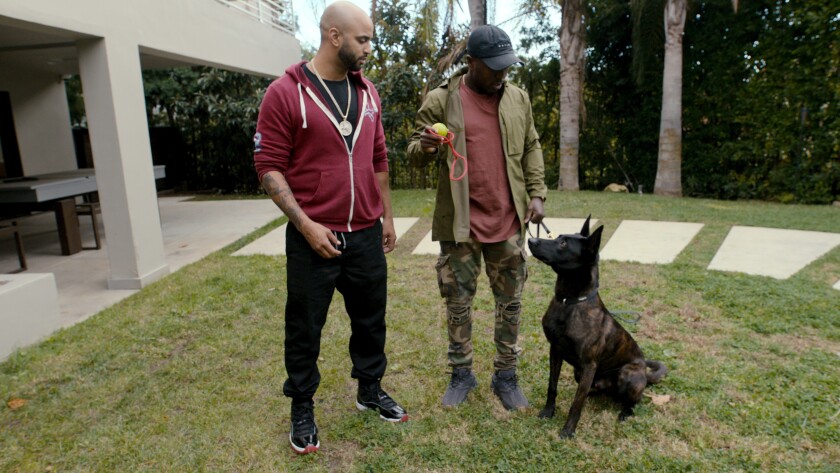 Who is The Sons of Sam narrator? Where you know Netflix…

In Netflix’s new docuseries “Canine Intervention,” Jas Leverette — a Bay Area dog trainer whose clients include basketball player Steph Curry, comedian Kevin Hart, boxer Andre Berto and football player Marshawn Lynch — shares the foundational principles of his business. Success is a result of knowledge and discipline. Aggression is rooted in fear, not spite. And no being, no matter how big a “problem” they may seem, is beyond saving.

Directed by Elise Duran, “Canine Intervention” is unlike any other dog training series to date. Throughout the season’s six episodes, the 37-year-old Oakland native also helps each dog owner with their own behavioral changes. Like “Queer Eye” and “Tidying Up With Marie Kondo,” the series, premiering Wednesday, is easy to watch and emotionally satisfying, as Leverette’s best lessons can apply to both pets and people.

Leverette spoke to The Times about why thoughtful dog training is more important than ever — and how thinking like a dog might help you withstand the rest of the pandemic.

You have a successful dog training business with plenty of famous customers. Why make a TV show?

You’re right — for me, it’s not about the money. I’ve got all these celebrity clients, I’ve got all the material stuff I could ever want, I’ve got a beautiful family. I’m doing this for the underdogs of the dog world, the ones who get left behind and forgotten about and, at the end of the day, euthanized at an alarming rate. These are the ones who, a lot of times, have the greatest potential.

I believe there are no bad dogs, just uninformed owners. So this show isn’t just about entertainment. This is a way to empower and educate the average person — especially those who can’t afford to go to dog training classes — with systems of how to get a dog into that confident, dopamine state and just be the best they can be. And it’s also about sharing a life philosophy, because the principles that I’m talking about with dogs can totally be applied to humans.

The misbehaved dogs aren’t villainized onscreen, with flashy edits or intimidating sound effects. Was that a conscious decision?

Yeah, because it’s not like these dogs have ulterior motives or were born evil or anything! People look past them because they’re so intimidating, but it’s really not their fault. Most of the time, they’re just aggressive because they’re insecure and scared.

They’re just like people: When someone attacks you before they get to know you, that hate and ignorance usually comes from a place of insecurity and fearfulness, right? Or it might be because they’ve had a tough life, and they don’t have that emotional stability because of whatever traumatic situation they might have been through.

So you don’t ever need to come in with pistols blazing; that’s an old, antiquated approach. Training should be a fun, positive experience for everyone involved.

In your sessions, you address the behaviors of both a dog and its owner. Why is that?

Because sometimes the owner is contributing to the problem without knowing it. My whole goal is about teaching proper methods of motivation, and being disciplined in practicing that motivation. All the owner needs to do is take the time to get to know their dog, and understand how to keep their dog engaged and motivated to be obedient and focused.

It’s almost like being a parent, and being present enough to give them the information to successfully be a part of society. When people can’t engage their kids — because Instagram’s got them, TV’s got them, whatever in the world has got them — they can’t even get them to tune in, and then they lose them. You have to figure out that kid and what it is that keeps them engaged so they don’t go astray.

What do you hope human viewers take away from watching your show?

Everybody has been stressed by this pandemic. Everybody’s sitting there not as socialized, and less exposed to all the things that usually motivate us. So it’s important to stay motivated and stay disciplined however you can, but also keep it fun, or else you won’t do it. You’ve got to reward yourself. So many people work too hard and train with no rewards. But we’re all creatures, we all need a little scratch on the back and someone to say, “Good job, you’re doing great.”

COVID-19 shutdowns have spurred a rise in pet adoptions, as more people have been working from home. Are you nervous that shelters may fill up again when workplaces reopen?

If the only reason they’re getting rid of a dog is because there have been issues, I hope the show will prove to them that their problems can be solved if they just put a little bit of effort in, because nothing in the world happens with no effort. Lots of people look for the easy answer for things. They want to just jump on YouTube and look for a video to tell them what to do. And it’s deeper than that. I try to think positive, and hope that people realize they’ve been spending all this time with their dogs over some of their friends, and how important these pets have become to them.

Would you be open to a second season?

I would totally be open to another season. My passion is to teach — the bigger my class, the more I’m motivated.

Rating: TV-PG (may be unsuitable for young children)

‘The Disciple’ review: Netflix has one of 2021’s best movies