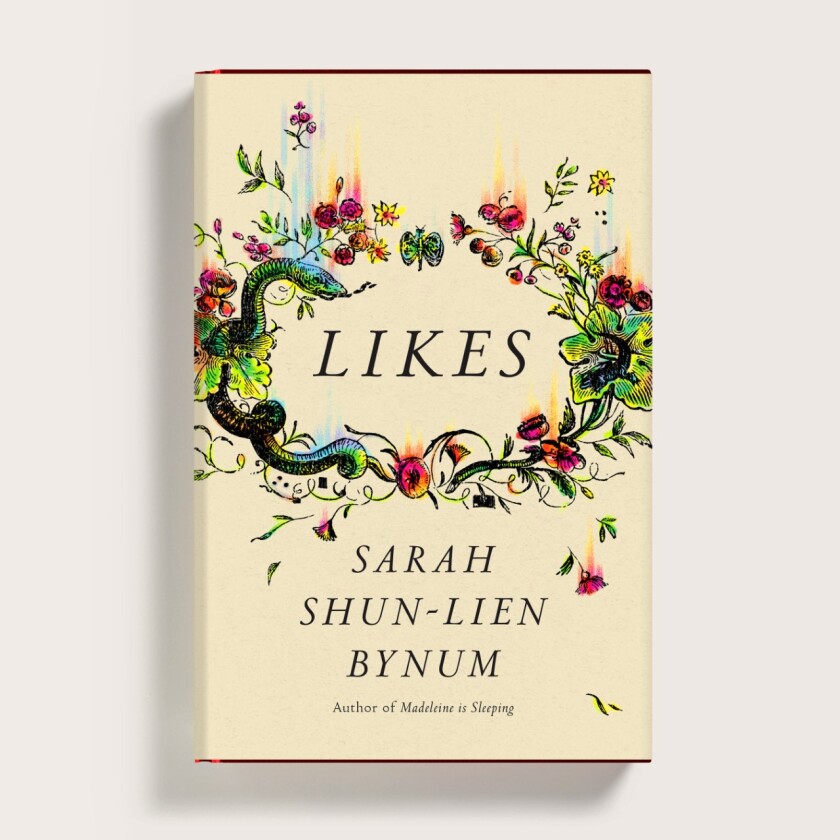 Bynum, a finalist for the 2020 L.A. Times Book Prize in fiction, will appear April 19 on “This Moment in Fiction” with Patricia Lockwood and Lauren Oyler, with The Times’ writer Amy Kaufman moderating.

RSVP for free at events.latimes.com/festivalofbooks

Exceptional, unique works of fiction can work as primers for themselves. “The Erlking,” the first story in “Likes” by Sarah Shun-lien Bynum, has all of the elements that appear in the rest of the book. Set at a fair at a children’s school, it’s part fairy tale thanks to a point of view that pivots from mother to daughter, who sees things through the glossy unreality of a little girl. There are also questions about representation and a setting that is definitely Los Angeles. A distant figure who seems to be a threatening boogeyman turns out to be John C. Reilly — the Oscar-nominated actor is recognizable, but not so famous you might not see him at a school event.

“That was one of the more documentary touches — because I did in fact see John C. Reilly at the Pasadena Waldorf School fair,” Bynum explained during a March phone call. “And felt this pang of regret: Why am I not a fellow parent with John C. Reilly?”

Small moments from her life appear in Bynum’s fiction — like her characters, she did grow up in New England, her husband is a TV writer and she does have a round face and cheery voice. But these are just tiny seeds in her sparklingly imaginative and carefully articulated stories, which have such a surprising and distinctive mix of realism and the fantastic that she was named one of the New Yorker’s “20 under 40” in 2010. Now, with “Likes,” she’s a finalist for the L.A. Times Book Prize in fiction.

Bynum moved to Los Angeles 16 years ago, and her stories display a keen sense of the city’s cultural economy. “People warned me that one of the greatest risks of living in Los Angeles is basing your lifestyle on your best year, and then realizing that there’s going to be much leaner years ahead,” Bynum said. “There’s always the danger of kind of living beyond your means, or always feeling as if you’re overextended financially.” So the couple driving nice cars have a backyard that looks virtually abandoned; a newly divorced aging It girl makes friends with her neighbor not so much out of kindness, perhaps, as because she’s angling for a meeting with the neighbor’s powerful partner.

Although Bynum wrote these stories over several years before the killing of George Floyd and the international #BlackLivesMatter movement that followed, a quiet thread of race and representation appears in many of them. “With my second book, ‘Ms. Hempel Chronicles,’ I approached the question of race and racial identity and history somewhat opaquely,” Bynum said. “I felt as I was writing these stories that I wanted to be addressing it more directly. I felt as if my more sideways approach wasn’t sufficient.” In “The Burglar,” which weaves together multiple storylines, a Black television writer is given a chance to advance in the writers room, but only if his script embraces embarrassing stereotypes.

One of Bynum’s signature moves is a slippery point of view — one story might switch from one character to the next, while another bleeds between, while sometimes she manages to bend the narrative around on itself like a Möbius strip.

“It’s one of the instances of how teaching can end up seeding one’s writing, because point of view is something that I tended to focus on A LOT, probably to my students’ dismay,” Bynum said with a laugh. When she taught creative writing at Otis College of Art and Design, she said, “at first I was doing it in a cautionary way, like this is what happens when you don’t control point of view, and how unmoored the reader can feel in the story.”

She cited Ursula K. Le Guin’s book on writing, “Steering the Craft,” which warns novice writers against unintentional slippages in point of view. It helped frame her teaching, but when it came to her writing, all those risks became tantalizing rather than frightening.

“I realized all of that time I spent talking and thinking about this as a teacher has ended up really shaping how I play with it as a writer,” Bynum said. “I’ve always been excited by the possibilities for how narration and point of view can turn out to be much more fluid and less solid ground than one might think. It certainly is something that occupies me and delights me as a reader.”

The surprising turns that come from these shifts give her stories an edge of uneasiness. Bynum cites Julio Cortázar’s story “The Continuity of Parks” as a model of the efficiency and surprise that can come with changing points of view. In “Likes,” to add to a reader’s instability — the good kind of instability — some stories in the collection don’t make any of those moves at all.

“Likes” came out in September 2020, and like everyone else whose book was released during the pandemic, Bynum had to find a new way to reach readers. She did online readings-slash-interviews with Aimee Bender, Brandon Taylor and Danzy Senna.

“The actual conversations and the dialogues were so much fun,” Bynum said. “You have this rush of adrenaline and this feeling of connection, and then you hit the ‘leave meeting’ button and you realize you’re sitting at your kitchen counter by yourself.” She laughed. “It is a very abrupt transition.”

Bynum said she has no lessons from the pandemic year, during which she and her husband have been working from home and their daughter has been doing remote school. “I feel as if I’m going to be just crawling over the finish line,” she said, laughing again.

Connecting personally with writers is something we all hope to do more of in 2021 — but until it’s safe, we at least have their books. Bynum’s is full of surprises.

Kellogg is a former books editor of The Times. She can be found on Twitter @paperhaus.

Masters 2021 purse, payout breakdown: How much prize money does the winner make?

For The First Time In History, A Man Is A Sports Illustrated Swim Search Finalist

Avicii biography: Life story of late DJ to be told in new book

After Contracting COVID-19, Sarah Palin Warns Against The Dangers Of Not Wearing A…