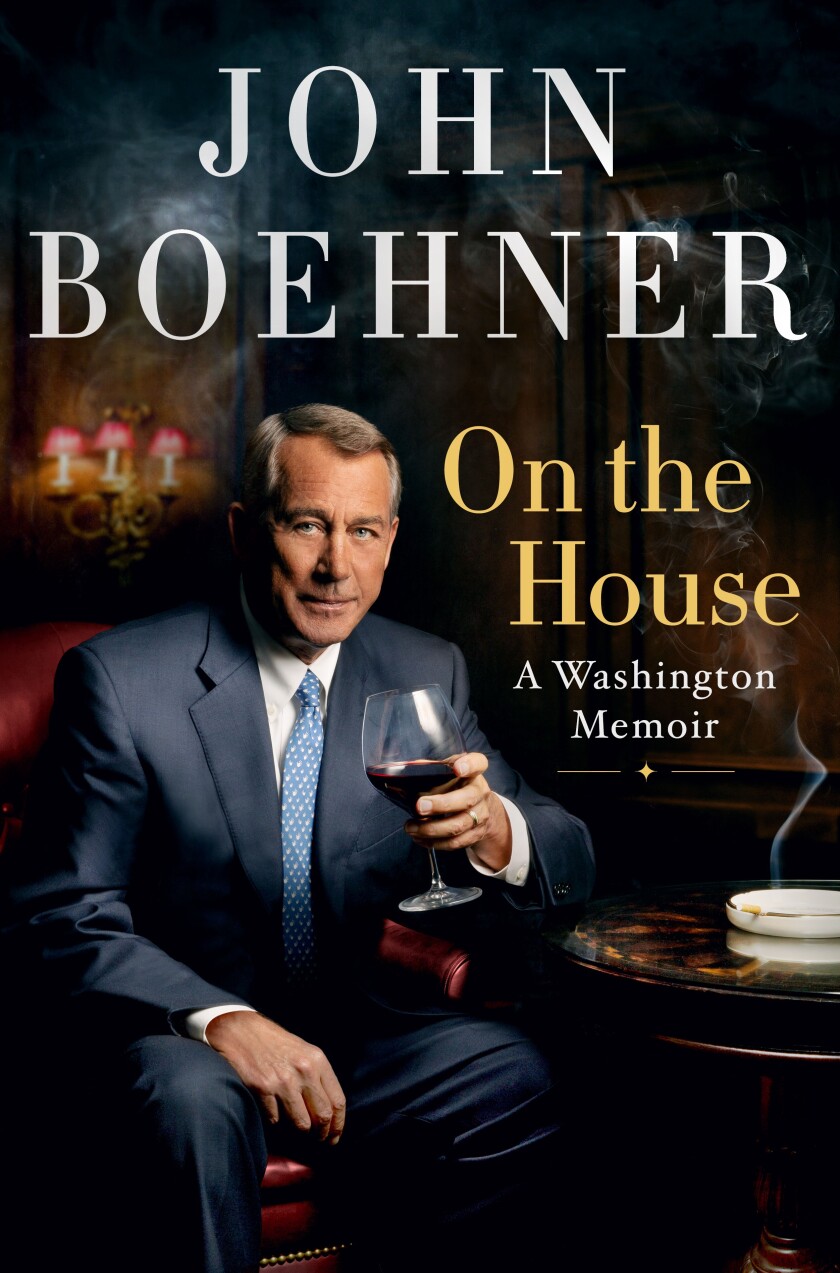 Elton John enjoys family day out with sons as they cheer…

On the House: A Washington Memoir

Reading John Boehner‘s political memoir is probably a lot like sitting down next to an old timer at the bar where he worked growing up in Ohio. There’s a lot of talk about the way things used to be and, before you know it, you’ve had one too many and you’re not sure how you’ll get home.

That is to say, the former Republican House speaker is good company throughout “On the House,” out this week. You can practically hear him uncorking another bottle of merlot as he literally curses the colleagues who made his job unbearable. Comfortably retired in Florida, Boehner has more than a few things to get off his chest about the right-wing outrage machine he blames for the lack of bipartisan compromise in Washington. (And if you choose the audio version, you’ll get an even more unfiltered view of Sen. Ted Cruz, very little of which is printable here.)

As with barstool tales, however, you might be left wondering what it all adds up to. Boehner indulges in lengthy digressions about high school football with Gerry Faust and golf with Jerry Ford. Even the juiciest stories from Congress aren’t particularly surprising, given Boehner’s well-known contempt for Republicans who were more interested in making headlines than making laws.

Boehner tees off on former President Trump for his role in the Jan. 6 riot at the Capitol, saying he “incited that bloody insurrection for nothing more than selfish reasons.” But otherwise Trump isn’t a major figure in the book, since Boehner watched his administration from the sidelines after retiring from Congress in 2015. Depending on your appetite for all things Trump, this leaves the book feeling pleasantly retro or frustratingly archaic.

Instead, this is a meandering trip down memory lane to a simpler time of fiscal emergencies, healthcare brinksmanship and bank bailouts, with Boehner overseeing a “bunch of knuckleheads” as the “mayor of Crazytown.”

Boehner’s experience with chaos long predates his time in Congress. He was the second-oldest of a dozen children, all living in a two-bedroom house. The boys had one room, the girls another and the parents had the couch. Bunk beds were stacked three high. It was as hectic as it sounds, and Boehner tried to create harmony by ordering around his siblings.

He also worked in his father’s bar, Andy’s Cafe, where there was a line at the door when it opened at 5:30 in the morning. Customers weren’t there for coffee. They wanted a shot and a beer before heading home after the night shift, or a shot and a beer on their way to work. One regular was nicknamed “Shaky,” because he shook until he had his first drink of the day.

Boehner grew up in a family of Democrats but gravitated toward the Republican Party after finishing college and becoming a salesman at a plastics company. The reason was simple. “Because I was making a lot more money, the government was taking a bigger chunk of it,” Boehner writes, and he didn’t like that.

When Boehner was elected to Congress in 1990, he joined a group of rabble-rousing freshman lawmakers. One of their first scalps was the House bank, which routinely allowed members to make withdrawals exceeding their account balances. The scandal, which cost members of both parties their seats, brought Boehner scorn from some colleagues, but also attention and influence. “When a member of Congress saw me or one of my boys walking their way, they looked like they wanted to either strangle us on sight or jump under their desk,” he writes. “But I was kind of used to my colleagues hating me. So I kept right on going. I had been elected to office to do something, and now I had the power to get people on my side.”

Boehner doesn’t dwell on the irony of what happened when, two decades later, he became speaker after Republicans took back the House in the 2010 midterm elections. Soon enough, he was complaining about newcomers who “decide they know how to run the place better than those of us who scraped and scrapped our way to the top over decades by putting in the work.”

Unfortunately for Boehner, he also discovered that the speaker’s office no longer afforded him the unmitigated power some of his predecessors had wielded. Rep. Michelle Bachmann, a Minnesota Republican whom Boehner describes as a “folk hero of the freak show set,” demanded a seat on the powerful Ways and Means Committee, even though she didn’t have the qualifications or seniority. Instead of taking no for an answer, Bachmann threatened to complain to right-wing media. “I wasn’t the one with the power, she was saying,” Boehner recalls. “I just thought I was. She had the power now. She was right, of course.” Boehner compromised, placing her on the prestigious Intelligence Committee instead.

In Boehner’s telling, the problem started early in former President Obama’s first term, when conservative radio host Mark Levin “made a sharp turn to the right.” Rush Limbaugh and Sean Hannity “were afraid Levin was going to cut into their audience share, so they lurched far to the right too.” In a race to the bottom, their shows “went from real commentary pushing conservative ideals to just pissing people off and making money off the anger.”

Around that time, Boehner writes, he went to Roger Ailes “to plead with him to put a leash on some of the crazies he was putting on the air” at Fox News. But it turns out Ailes was one of the crazies himself, and he began rambling about conspiracies involving George Soros and Hillary Clinton. “I walked out of that meeting in a daze,” Boehner writes.

He still found Obama “lecturing and haughty,” often pushing too far left during negotiations over taxes and spending. But at the same time, “how do you find common cause with people who think you are a secret Kenyan Muslim traitor to America?”

One of Boehner’s worst experiences came in 2012; tax cuts signed more than a decade earlier by former President George W. Bush were set to expire, and Boehner failed to unite his caucus behind a compromise proposal. “Once again, I was at the negotiating table basically naked,” he writes. “My own party had taken away my boxer shorts.”

Boehner is clearly bitter that the same self-proclaimed conservative warriors who fought any attempt to make a deal with Obama didn’t raise a peep when President Trump started running up the country’s deficit even higher. “These are the same people who were willing to destroy our economy to make their point but went on to suddenly abandon this core principle,” he writes. “And why? Because it’s not really about the money. It’s not about principle. It’s about chaos.” Boehner doesn’t just blame Trump for the Capitol riot — he draws a direct line to the House Freedom Caucus, calling its members “political terrorists” who can “embolden actual terrorists.”

He seems grateful that he left Congress before Trump took office, “because I’m not sure I belonged in the Republican Party he created.” But you might wonder what kind of speaker Boehner would have been if he’d stuck around. A hint comes from his retelling of the standoff over repealing Obamacare in 2013, when Republicans pushed a government shutdown in an ill-fated effort to gain leverage.

Boehner hated the idea of holding Washington hostage, knowing Republicans were “on the Titanic playing chicken with an iceberg.” But he went along with it. “As dumb as I thought this was,” he writes, “I was the leader, and this was my job.” Sometimes being a leader also meant being a follower.

Waterside house with recording studio used by Oasis on sale for £2.25m

Who was John Carr and what happened to him?