Coming to an L.A. stage: Proof we’re in a golden age of American playwriting 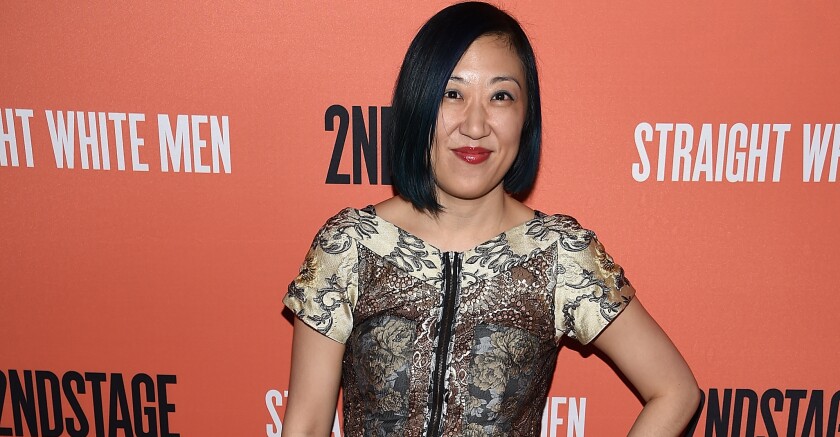 Ronnie O’Sullivan and 11 others emerge from…

The first show I’ll be attending in person since March 8, 2020, is the Fountain Theatre’s outdoor production of “An Octoroon,” and I can’t think of a better way to resume my old theatergoing habit than with Branden Jacobs-Jenkins’ 2014 play. This postmodern riff on “The Octoroon,” Dion Boucicault’s 1859 melodrama of racial secrets and antebellum suspense, is an emblematic work in what I consider to be a golden age of unorthodox American playwriting.

Too distinctive to lump into a single category, these playwrights are too bracingly excellent not to be recognized as part of a cultural groundswell.

This period in American drama, as I’ve been jubilantly contending, is the most exciting in my more than three decades of keeping close tabs on the theatrical scene. When I started out as a script reader at Joseph Papp’s Public Theater in New York, American playwriting was just waking up again.

It’s worth remembering that when Wasserstein won the Tony for “The Heidi Chronicles” in 1989, she was the first solo woman playwright to win for best play. And Wilson was just the second African American playwright to receive the Tony when “Fences” was honored in 1987. (Between these Tony victories, David Henry Hwang’s “M. Butterfly” took the prize, extending the march of diversity.)

This galvanic shift enticed a perpetual student to declare, to the loud chagrin of his parents, that he was going to pursue some kind of career in the American theater. (The word critic, I swear, never once crossed my lips.)

I bring up this ancient history only to establish that I’ve been inspired before in my many years on the scene, but never have I experienced a sea change as extraordinary as the one that has taken place in the last decade. Diversity, a hallmark of this vibrant era, has given American drama renewed life through new premises, new perspectives and new points of empathy.

Even Broadway has finally begun to recognize that something special is going on. Harris’ “Slave Play,” which has received more nominations than any other drama in Tony history (albeit in a truncated season), crystalizes the new producing consciousness.

Drama that would have been deemed commercially impossible only a few seasons ago is now being embraced as transformative. “Slave Play” wasn’t simply a critical hit — it was a game changer in how Broadway attracts new audiences. The same might be said of Heidi Schreck’s “What the Constitution Means to Me,” another improbable success story that now seems to make perfect sense.

Producers, theater owners and artistic directors haven’t been quick off the mark. Their slowness, in fact, may have inadvertently contributed to this generation’s flourishing, as playwrights no longer believed in the feasibility of making a living through nonprofit productions of their plays, never mind Broadway runs. (“Outrageous Fortune: The Life and Times of the New American Play,” a 2009 study written by Todd London with Ben Pesner and Zannie Giraud Voss, breaks down just how bleak the picture was in the aughts for working playwrights.)

Incubated for the most part in graduate writing programs that were becoming both more diverse and more level-headed about economic realities, this new generation of dramatists graduated to form an alternative to an increasingly commercialized theater culture that was largely white, artistically conservative and not especially interested in rambunctious plays expressly tailored to the stage.

Nonprofits by and large weren’t at all embarrassed to be chasing Broadway glitter and thinly disguised TV pilots. There were institutional exceptions, such as Playwrights Horizons in New York and Steppenwolf Theatre Company in Chicago. But as jukebox musicals and celebrity-driven revivals swanned in the limelight, innovative dramas were left to fend for themselves.

What changed this glum picture was the vibrancy of the writing emerging from off-Broadway pockets and those resident theaters that hadn’t entirely abandoned their missions. Raves were pouring in for Jacobs-Jenkins and his peers, who were beginning to monopolize the most prestigious prizes. Even the once-stodgy Pulitzer Prize board, which had in the past declined to give any award in those years when the drama jury failed to provide a conventional enough slate of finalists, started to make bolder choices, with Hudes (“Water by the Spoonful”), Akhtar (“Disgraced”) and Baker (“The Flick”) winning in startling succession.

Producers looking for preapproved material were forced to take another look at work that was being celebrated everywhere except on the most prominent stages. If Broadway and copycat regional theaters were to lay any claim to theatrical vitality, the criteria of what constitutes a Broadway or a Mark Taper Forum play would have to change.

I’ve never understood why artistic directors haven’t been more eager to take advantage of this moment, to exploit as a selling point the unusual bounty of homegrown playwriting. Perhaps the audience for groundbreaking drama is limited. Marketing to familiar tastes is no doubt easier than preparing the way for the new. But there’s an opportunity in the great reopening to build enthusiasm for what would be heralded as a movement were this burgeoning of imagination happening on the same scale in painting or the novel.

This bumper crop of playwrights may not be united by a common aesthetic, but a distrust of convention and a commitment to unshackled theatricality have forged communal bonds. There’s nothing like rebelling against the status quo for engendering solidarity, and these writers have refused to conform to basic assumptions about how a play is supposed to behave.

After my positive review of Echo Theater Company’s production of Jacobs-Jenkins’ “Gloria,” a reader wrote to complain that the play’s climax came at the end of the first act and not at the end of the second, as required by every known playwriting handbook. I understood the confusion but suggested that perhaps the unusual dramatic structure indicated that the author had something beyond plot payoff in mind.

“An Octoroon,” which was ranked No. 2 on a New York Times list of the 25 best American plays since “Angels in America,” is an even more challenging work for the uninitiated. Performance styles converge in a neo-Brechtian frenzy. A spirit of satiric zaniness keeps the laughter flowing, but this meta-theatrical comedy is as jagged as the racial history it depicts.

Writing in the noble tradition of all revolutionary theatrical movements, Jacobs-Jenkins doesn’t make it easy for theatergoers to find their footing. Dissonance is built into a dramaturgy that succeeds in delivering, to borrow art critic Robert Hughes’ overused yet still-valuable phrase, “the shock of the new.”

Jacobs-Jenkins is not alone in refusing to pander to hidebound expectations. Young Jean Lee’s theater company adopted the motto “Destroy the audience,” not out of perverse hostility but out of a desire to challenge preconceived notions, including the long-held belief that the white, male, middle-class spectator is king.

Baker’s pursuit of a new realism caused a mini uproar when “The Flick” had its premiere at Playwrights Horizons and a share of the audience couldn’t understand why they were being asked to eavesdrop on the custodial activities of employees at a New England movie theater. This play, as stunningly original as it is testing, has yet to receive an L.A. production, despite winning the Pulitzer.

This fate is shared by Drury’s “Fairview,” which does something even more dangerous than slow down the dramatic clock. This conceptually daring drama asks white audience members to trade places with people of color, to understand how it feels to be under the constant surveillance of an oppressive gaze. (The bigger theaters in the region have so far been chary, but what a salubrious switcheroo this reversal would be for audiences at South Coast Repertory or the Geffen Playhouse!)

Breaking habits in the theater is a tough business, and nothing perhaps vexes playgoers more than a drama that doesn’t dictate what a theatergoer is supposed to think. In an interview about the divergent reactions to his Pulitzer Prize-winning drama “Disgraced,” Akhtar acknowledged that his intention was to create a space “where opposing points of views, opposing readings of the play, can coexist.”

This retooled debate drama was accessibly engaging, luring audiences along with sophisticated sitcom banter and heated post-9/11 identity politics. But the point wasn’t to resolve tensions but to fan them, to allow for “a confrontation with the recalcitrant tribal tendencies we all harbor.”

In my experience of seeing the play on Broadway and at the Taper, the drama continued after the curtain call, with theatergoers fervently, if not furiously, discussing what they had just experienced on their way out. “I aspired to accomplish with this structure a kind of shattering of the audience, after which they have to find some way to put themselves back together,” Akhtar explained. The post-show colloquies I witnessed were an example of this repair work.

Form can be as provocative as content for these playwrights, who want their audiences to consider the relationship between the two. Perhaps this is the reason so many of these writers are explicitly drawn to toy with older dramatic models. Lee’s “Straight White Men,” which was the first play by an Asian American woman to be produced on Broadway, explores the contentious notion of privilege through a traditional family holiday drama that couldn’t be less traditionally framed.

Jacobs-Jenkins does something similar in “Appropriate,” setting up a domestic epic in the great tradition harking back to Eugene O’Neill, only to probe into something not usually included in the genre, the insidious legacy of slavery in America. In “An Octoroon,” a once-popular, now flagrantly outdated 19th century melodrama is recast to shed light on the troubling continuity of our racial politics.

Refreshingly, the formalism of this new work is rarely cold. What I perhaps appreciate most about these intrepid playwrights is the way their experimentalism doesn’t come at the expense of psychology or emotion. The plays may be demanding in their multilayered theatricality, but history and humanity are ultimately at stake.

A new acquaintance recently asked whether she should see “An Octoroon.” Not knowing her taste, I found myself qualifying my affirmative answer. Here’s what I should have said:

Yes, if you want to catch a glimpse of the most talented generation of playwrights in the last 40 years; yes, if you care to ponder the relationship between how we conceive our lives and the drama we consume; yes, if you want to believe that theater can challenge as well as divert. In short, yes, if you still care about drama as an evolving art form that can shed light on what it means to be an American at this unique crossroads.

bitchy | Prince William has a book coming out too, you guys (but he only ‘wrote’ the…

Can the HFPA and Golden Globes truly change?