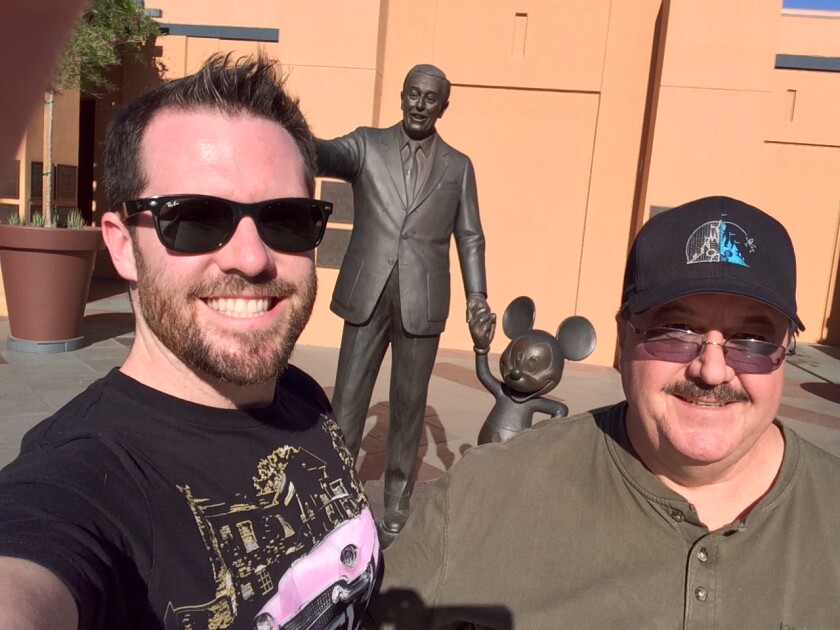 I Had A Story Ready. But I Woke Up Feeling The Need To…

Mark Wahlberg on Portraying the True Story of Joe Bell

Prince Playing Basketball in High Heels is a Story You Must…

For one of the designers who worked on the land, some of these pieces of environmental storytelling go beyond fleshing out the backstories of this theme park take on the Marvel Cinematic Universe. Consider them Easter eggs of the most personal variety.

Check out the wheel rim, for instance, of a Ducati motorcycle. The Ducati certainly fits the attraction’s story of Peter Parker/Spider-Man, who has opened a sort of school for would-be engineers, setting up his workshop in a former automobile warehouse once run by Howard Stark, Iron Man’s father. But the wheel rim tells a different father-son story.

It was once part of a motorcycle that belonged to the father of former Walt Disney Imagineer Morgan Lee Richardson, who says his dad’s most passionate hobby was riding around Northern California. Richardson’s father, an engineer himself, died unexpectedly in late 2019 just as Avengers Campus was nearing its home stretch.

“The motorcycle rim gets me every time,” says Richardson, 35, who was with Walt Disney Imagineering for nearly seven years until he was laid off with some 400 other Imagineers after COVID-19 forced the parks to close. When he visits Avengers Campus, he not only sees part of his career but a bit of his family history.

“That’s the most personal thing in there. A lot of the other stuff came from [my father’s] career, but what he enjoyed most was driving up through the hills behind Milpitas, through Old Calaveras Road, on his motorcycle. That was his release. That was his personal time, and he shared it with me and it was a thing we would do together.”

Throughout the Spider-Man-influenced parts of Avengers Campus, one can spot numerous items that belonged to Matthew Richardson, whose work is described by his son as “highly technical” and requiring “weird little components.” Richardson says his dad’s career was centered in the semiconductor industry, “where he is credited with inventing a number of components that have helped advance manufacturing and production of chemical mechanical planarization technology.”

In other words, he had a lot of equipment fit for a science lab, and there are beakers and flasks dotting the attraction’s gift shop. In the pre-show room of the ride, look for a solid microcrystalline silicon billet, ancient silicon wafer chips, vintage cartridge casings for hard drive disks and microscopes. In the store, one can find a Richardson family chemistry set.

“The very last thing he told me before he died was that he was excited to come see Avengers Campus,” says Richardson, noting that his father was not a “theme park person.” Yet with Avengers Campus (for which Richardson served as a field art director) and its science-facility backdrop, the artist and designer at last had a project his dad could relate to.

“I know that I can go back, year after year,” he continues, “and I can point these things out to my kids. This was my dad’s. This was your grandfather’s, and now it’s in a Disney park. It’s a small, little thing, but it’s part of an entity that does nothing but bring joy to people. They motivate people to use their mind, their intelligence and their imagination to make the world a better place. My dad was all of that for me.”

And from his colleagues’ perspective? “The props team was like, ‘These are great. We don’t have to age them.’”

Richardson’s co-workers supported his desire to use his dad’s engineering tools in the land.

“When my mom found out that we could put some of dad’s stuff in there, she cried,” he says. “She was moved that Disney was willing to do something so personal. It’s tough when you lose someone. You struggle to find ways to immortalize their life.”

Richardson is far from the first Imagineer to have his family lineage preserved in a Disney attraction. And while Disney didn’t provide a comment for this piece, Richardson’s story illuminates the importance of these spaces and their cross-generational appeal.

As Disney and Universal parks double down on brands such as “Star Wars,” Marvel, Harry Potter, Nintendo and others, it’s helpful to remember that for many they stand as more than franchise extensions. Physical spaces creatively designed are still full-scale, hand-crafted sculptures, even if there’s an Avengers logo on it, where we go to play and connect, a process enabled only because theme parks are ultimately rooted in the art of individuals who can make the attractions intimately personal.

And that goes for everything, from giant, graffiti-like murals to the concrete bunkers that anchor the Cars Land entrance of Avengers Campus. When a place is built to last, it becomes no less real than spaces outside the gates of the park. Richardson has dozens of tales of finessing the land’s details, such as the green glass embedded in the walls of the mystical sanctum area themed to Doctor Strange.

“Sometimes you just have to do things by the seat of your pants,” Richardson says. “I ordered the glass online, and they delivered 200 pounds of glass chunks. They put it in front of my front door, so when my poor wife came home from work she couldn’t get in. It was these 60-pound chunks that you had to lift one at a time. That was all developed in the field.”

Pay close attention near Cars Land to the carvings in concrete. They presented one of the most intense challenges for Richardson and his team.

“Those were done in single pours — those big, giant walls,” Richardson says. “That’s not character plaster. It’s not like there’s a steel frame under there and then you just put plaster on it and make it look like concrete. That is solid concrete, and as it was poured we had to rush rush rush to get retarder on it to make it look like it was aged and feed buckets of dirt into it. A lot of the land came down to hand-distressing everything with a giant sledgehammer.”

While Richardson’s path to artist and Imagineer wasn’t one his father always understood, it was ultimately his dad who, unknowingly at the time, set this career course. Richardson‘s own art is bold, a hard wallop of color contrasts that can at times be psychedelic. Richardson jokes that his friends call it a “kick to the face” with color, a phrase he takes as a compliment.

There’s an underlying Pop feel to his art, much of which explores his passion for wildlife conservation. Although he hopes to someday circle back to Disney, Richardson says a long-term goal is to use art and design to deepen our connections with wildlife. All his personal art, however, appears rooted in a mix of rock ‘n’ roll and comic books.

“The breadcrumbs were laid up to this point in my life via my dad,” Richardson says. “I was a tiny guy when I started sketching superheroes. I was really into comic books, and my dad bought me my first comic, which was ‘Spider-Man,’ and I still have it, and it means a lot to me, and it meant a lot to me to be on Avengers Campus. I have this connection through comics with my dad, and I grew up inspired by those guys.”

Richardson says his father approached his engineering career in a way similar to an artist. While the elder Richardson was experimenting with computers and technology, the younger Richardson saw a playful image — someone fiddling with high-priced toys who was an inventor. The first proper show scene of Web Slingers is loaded with old-school computer and engineering equipment, but amid the twinkling lights — and a presentation from Spider-Man — it feels somewhat magical.

“What’s funny about that is he had workspaces at home and in the garage, and it looks like that,” Richardson says. “You throw his stuff in the middle of the pre-show scene, where it’s supposed to look like an insane engineers’ workstation, with trinkets and doodads and buckets of bolts and spools of wire. Everything I see there I saw in my dad’s workspace.”

Richardson pauses and says something that likely anyone who has ever loved Disneyland can relate to: “It feels like home.”